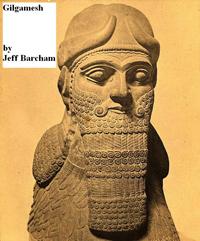 Gilgamesh is a new version of the ancient Babylonian Epic. Gilgamesh is the brash young King of Uruk (a city in the modern Iraq). When a rival, in the form of the wild-man Enkidu, arrives, it sets off a sequence of battles and journeys that lead Gilgamesh to the end of the world, and the limits of his sanity.

This book presents a new version (in verse) of the ancient Sumerian and Babylonian Epic of Gilgamesh. It tells the history of Gilgamesh, the king of Uruk (a city called Warka in modern Iraq) who is believed to have lived in the 28th century BC.
Gilgamesh starts the story as a brilliant but brash monarch, having inherited the throne from his father (Lugalbanda) at a young age, with no rivals. When an equally powerful rival emerges, in a wild man named Enkidu, Gilgamesh realises that he needs to perform heroic feats to make his name.
In so doing, Gilgamesh and Enkidu offend the gods and the people of Uruk, and learns the value of diplomacy and subterfuge.
When Enkidu dies, Gilgamesh is grief-stricken, renounces his throne, and embarks on a journey to discover the secret of immortality. There he finds Utanapishtim, the Sumerian equivalent of Noah, who survived the great flood and was granted immortality by the gods.
The Gilgamesh story represents the first great literary c.. (Read more)